I'm a 26-year-old Graphic Designer who went to high school on the Gulf Coast. I have lots of good memories from there. My mom still lives down there. Out of fondness for the area, I had the idea to offer small businesses (who had been affected by the Gulf Oil Spill) a Free logo design (or redesign) package. I have the full info here: http://blog.shumyla.com/2010/10/free-logo-designs-for-small-businesses.html

The premise is that they need to be a legit business, and they must have a real need. I'm trying to get started on it by November so I can have this ready for them by December — a xmas gift, I suppose.

If you think this would benefit someone, Please help me get the word out. I know that the members of this board are super-diverse — maybe you know someone-who-knows-someone who owns a small business? I feel I could definitely use some logo-work in my portfolio, so this would be mutually beneficial. Thanks again. (Any comments or thoughts appreciated).


With decades of experience in theatrical and event lighting and years in the event, DJ and audio production business, GreenLabel Productions can offer you professional services you can rely on at a price you can afford.

Whether you are planning your wedding day, looking for a DJ for your Mardi Gras ball, need to light your next school play, or need professional audio at your next corporate event, GreenLabel has what you are looking for.

Anybody know anyone hiring for customer service positions in or around gulfport?

If I'm still married, but filing for divorce soon, can I legally kick my husband out of the house we rent? And if he's not on the lease?? And how will it work if he decides not to sign the divorce papers? Will they give him a certain amount of time before doing so?

in October I was acting as security for a party at the casino I work at.
At this party the director of security decided to attend with his girlfriend(not his wife). He asked a different person twice to remove her top. Once to touch and once to take pictures.
I had to report this under company policy and there was an investigation. He was suspended a day. He found out that it was me and twice that week tried to intimidate me and tell me a family member's employment and my own may be affected. I spoke with the head of HR and I thought it was over.
2 days ago he approached me again and started his speech again about how I almost cost him a job and if I wanted him to look out for me and my job I needed to watch his back. He also started asking me about my family and how they would be if I lost my job.
Obviously going to anyone at the casino won't work. And quitting isn't an option. Any suggestions?

A Petland has opened in D'Iberville...

Yesterday during a news conference, The HSUS revealed the results of an 8-month investigation into Petland Inc., the country’s largest chain of puppy-selling pet stores. The results reveal that many Petland stores across the country are supporting cruel puppy mills, even while telling unsuspecting customers that the dogs come only from good breeders.

According to Stephanie Shain, director of The HSUS Stop Puppy Mills Campaign, “Petland stores investigated by The HSUS are perpetuating the abusive puppy mill industry, where dogs are treated not like pets, but like a cash crop. They know that consumers won’t stand for the cruelty inherent in mass-breeding facilities, so they make outrageous claims to hide the reality that the dogs came from puppy mills. People have a right to know exactly what they are buying, but the real victims are the breeding dogs who are confined to life in a cage for as long as people are duped into buying their puppies."

upload your pet's photo to the 'Pets Against Puppy Mills' page

Now get out there and pick up your campaign signs. Both sides...go go. No need to litter.

STATIC's latest episode is now online for your viewing and listening pleasure. This episode includes an exclusive interview with DFA recording artist THE JUAN MACLEAN, and we go into the studio with New Orleans' own MyNameIsJohnMichael while he continues his journey to create a track a week. We also have a Breakfast at Sulimay's episode and plenty of great videos. Next episode: Our Voodoo special...see it through the eyes of a local. Head to statictelevision.com to see the whole episode.

I'm selling off both my current bikes to pay for a medical procedure. I need to sell these ASAP! Lucky me does not have medical insurance, but you get the picture.

This bike is in PERFECT condition, I only put about 2413 miles on it before I got my 'Busa. It has NEVER been dropped or wrecked. I've had a few light modifications done:

Just like my other bike, this is near perfect condition. I get it tuned up and the oil changed like clockwork. It's pretty much stock except for the 25 shot nitrous system on it and the aftermarket pegs, LEDS, and tank grips. This thing is WICKEDLY fast. 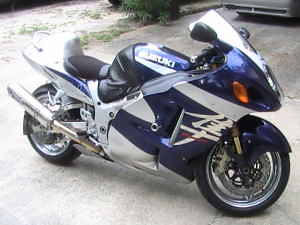 Any questions, email me or comment. No test drives unless you have the cash in hand. To many idiots out there wrecking bikes on test drives. I can meet you nearly anywhere between Baton Rouge, LA and Panama City, FL. Both bikes have stands (like the one in the Ninja's picture).  Like I said, I have some medical issues I need to resolve so I am selling my bikes to pay for it.

I also have the following vehicles I am willing to sell as well if anyone is interested:

All my vehicles get scheduled tune ups, oil changes, etc. I'm OCD about that...

Between the cash I already have and if I can sell two or three of these vehicles, I should have everything taken care of and can buy me a new bike. Lord knows I don't want to be driving our car around much... I feel gay even sitting in that thing...